Despite keeping Kempton to a score that looked achievable given their previous batting exploits, Merstham's first XI couldn’t continue their winning habit in the Surrey Championship Division Five, losing by 137 runs.

Having won the toss, Laurie Nicholson invited the hosts to bat and was rewarded with an early wicket, Lithon Tarofder taking the first of his 4-28 in 12 overs.
Unfortunately it was 113 run before Merstham struck again when Humayoon Nasir removed the other opener for 71, caught by Ben Baker. Nasir (2-58) struck again soon after and Kempton lost three wickets in the space of 19 runs and Merstham clawed their way back into contention. 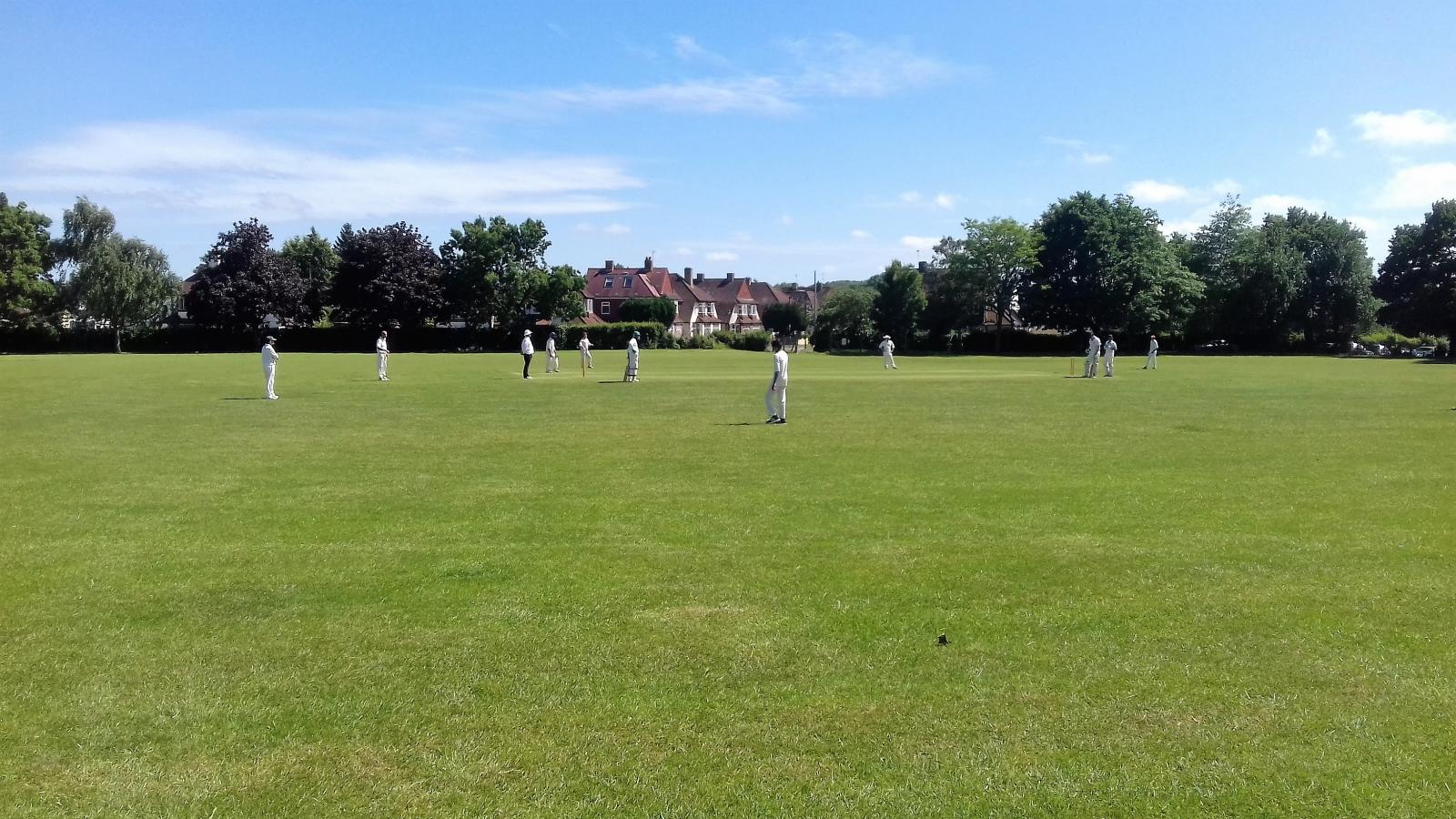 When Tarofder returned, he had better luck than his team-mates, taking another three as Kempton declared in the first timed game of the season on 242-8.
In reply, Ed Dawson began the innings well, but found partners hard to keep and top scored with 38, gone fourth wicket down on 69 as nobody could take control of the innings against Assad Buttar (3-26) and latterly Andy Ward, who took 5-11 in 11.1 overs to dismiss the visitors in the 30th over.
After two wins in a row, it was not the performance that the Magics were looking for and they will hope to redeem themselves on Saturday at Weybridge Vandals, who sit second bottom, a place below Merstham.

In the second team fixture, at home to Kempton, it was a case of clubmen and catches win matches.

After putting on the cover on Thursday night to protect the wickets from Friday's rain, captain Richard Feist made a plea to players to help remove it early Saturday  morning to do some pitch preparation.

Three clubmen stepped in to help the captain and vice captain sort it out. Thanks to Struan Clark and Thomas Kenny for their early start.
The wicket was dry until the downpour before the game meant that a delayed start was upon us. Feist got out the blow dryer and worked for 45 mins to get the start at 1235.
While doing this, he asked George Chellis to do the toss and he came up trumps to win it and elect to bowl first.

Kempton were keen and padded up ready to go, but they all same came and went.
Returning Saf Aslam, at the wrong end for him, picked up 4-17 in 10 overs with two maidens. He was at the "wrong" end because the big friendly giant of Bobby Sharp was getting angry and ready to steam in down the hill.
Sharp was rewarded with 4-38 in 13 overs (one maiden).
How these two could have more if Merstham had spent some time warming up their hands!
If the saying catches wins matches actually is true, this week was to prove it wrong and correct all in one innings. Six dropped catches (four simple) could have helped the opening pair to even better figures.
Then two great catches from Chellis and Patel (who had dropped one earlier) meant the team went from ridiculous to sublime catching all in 28 overs.
Kempton were thankful for some Carribbean flair on this Saturday as H Doyley top scored with 31.
Imran Aslam also took 2-19 off his five overs. And Kempton were all out for 81 - after six dropped catches.

Merstham had Jason Drewett back at the top of the order but it was Nav Saeed who took the game to the bowlers this week, smashing the ball to all parts with real cricket shots.. scoring a quick fire 32. Drewett started to hit his drives and made 28 also in quick time.
Both fell in the space of a couple of balls to new bowlers but Chellis (11 not out) and Haseeb Qureshi (3 not out) finished the game off with Merstham finishing on 83-2 off 12 overs.
Another good win but still room to improve for this team. Hopefully they continue next week at home again to Stoke.

The third team were asked to bat at RA&A School after the game at The Ring had to be switched, because of an invasion of temporary tourists.

One of the openers Jason Kyte knocked 28, much of it with Ashar Syed, whose 50 included three fours and three sixes. After a mid-order collapse, Ben Snelling (60 not out) and Ben Carter (33 not out) pushed the score to 193-7 from 45 overs.

Would that be enough on unfamiliar territory? Callum Letts took 2-29 in his opening four overs, but didn’t come back on as Snelling (1-20 in seven), Carter (1-8 in six) and Sunny Bowry (4-16 off four overs) did the main damage before Harrish Joseph took the final wicket with the first ball of his third over to dismiss Banstead for 106 in the 26th over.

The fourth team won for the first time this season (apart from games conceded to them) at Beddington. Or Cottenham Park, near Raynes Park station where Beddington hosted the match.

Omer Shuja could have had three (not one) wickets in his opening spell were it not for failed diving catches, but kept the openers largely in check.

For once, the middle period of the innings was held together, rather than let the opposition score too heavily and get the upper hand, by captain Gopa Nair and Satya Premakumar bowling in tandem.  After Luca Retter caught one just behind the non-striking end - after Nair shouted it was his ball to catch and not bowler Will Prior’s - Prior took a diving caught and bowled with the inning’s final ball and a target set of 185 to win.

Openers Ian Lamont (18) and David Reeves set about the task patiently, taking good chances for singles and striking the odd boundary to keep the over rate comfortable at about four an over, until aging Lamont got tired and swung at a staight one, after a 50 partnership.

Reeves, returning to the game recently after univserity, went on to confidently strike 73 including 11 fours, taking most of the strike from young Toby Buckle (18). This fantastic innings gave Merstham a strong platform for Glen Mollan (20 not out) and Rob Wood (4 not out) to finish the job after Prior got his season going with 15. Merstham won with a couple of overs to spare.

One day soon, all four Saturday sides will win on the same day.