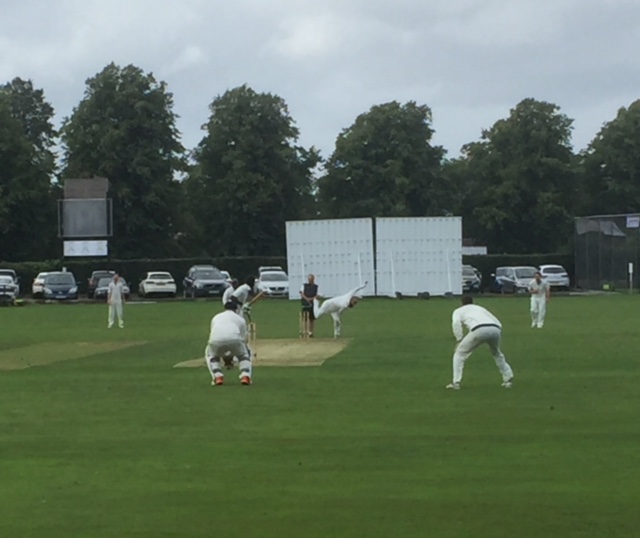 They are 13 points from safety behind SinjunGrammarians, putting huge significance on their home game with Weybridge Vandals this weekend.

On soggy Saturday, the Magics lost the toss and were inevitably asked to bat. Matters started badly when George Neal (1) was bowled, and the hosts were 18-3 with Will Preston (13) and Lithon Tarofder (1) back in the clubhouse in a rain-affected 80 over game.

Captain Laurie Nicholson (12) had some success rebuilding the innings with opener Ben Baker (33) and Ed Dawson (27) put in a steady knock before Finn Harris (6) put on the biggest partnership, of 41, with Ali Jaffri (32) as Merstham reached 138-8 in their allotted overs.

With the ball, Merstham had early success themselves, running out Kieran Axten for one with just two runs scored and Tarofder bowling the other opener Karan Singh Varma for 13.

However, 75 runs passed before Merstham could take another wicket, Ali Jaffri having Mohamad Ozman (40) caught behind by Ed Dawson.

By then, Ozman and Ward, who scored 36 before being trapped lbw by Ali (3-15 off eight) had done much to set up a victory which only came with seven balls to go, five wickets down.

The second team remain in comfortable mid-table after defeat to Kempton's second team, who are bottom of their division.

Will Matthews took four catches behind the stumps, three to Ameer Pasha whose 5-18 in 4.4 overs started with Kempton's second top scorer who had 24. Gary O'Connell's late 25 pushed the hosts' score to 100 off 29.5 overs.

After losing George Chellis early, Jack Letts (25) and Haseeb Quereshi (21) gave Merstham the platform to go on and win. But batting didn't prove easy and only number 10 bat Imran Aslam after that made double figures (12) as Merstham were all out for 83 in the 27th over.

The third team (pictured by Chris Lowe) are determined to chase Dulwich hard for the second promotion spot and, 19 points behind them, host them at the Ring this weekend.

Their other remaining games are against teams in the bottom half, however nothing will be taken for granted after winning by two wickets at Banstead.

Asking their hosts to bat, the thirds were rewarded with early wickets for Callum Letts (2-40) and Fergus Carrick (4-17) but it took longer to remove number six Palani Gopal, whose 52 gave the hosts a foundation for a defendable score before Zee Murtaza had him caught by Ben Snelling. Joe Rees-Davies also took 2-21.

In reply, Ashar Syed carried his bat for 61, having started with a fine partnership with David Reeves before the latter was out for 23.

After James Lowe, late in the innings, also pushed along the score with 23, Carrick scored 10 not out to complete the task after 39.1 overs.

The fourth team bowled out Beddington at The Ring, where in a game reduced to 35 overs per side Asif Akhtar and Harrish Joseph took two early wickets each.

Joe Ridley led the resistances for the visitors with 25 and, late in the innings, Harry Sone got the same score. But that was amid Asfar Khan whipping through the middle order with 4-23. Nav Saeed (1-2 off 3) eventually dismissed Sone and Beddington fell for 104.

Merstham lost a succession of wickets trying to force the win, being reduced to 33-5 off 15 overs. Dilhan Jayamanne (26) and Saeed (30 not out) steered a path towards victory, with Joseph adding 16 before Luca Retter joined Saeed to finish the job in difficult batting conditions, in the 34th over.