Saturday round up: Dawson does a Stokes and Khan is a star

Amid perhaps one of the most bonkers Ashes Test matches, Merstham Cricket Club's first team had their own heroic performance in their battle against their own dreaded scenario - relegation.

Opening batsman Ed Dawson, like Ben Stokes for England, put in a back-to-the-wall innings of 70 as Merstham's first team dug out another vital victory in their bid to stay in the Surrey Championship.

Victory at Egham lifted them one place out of the Division Five relegation zone after a magical opening innings.

Wicketkeeper-batsman Dawson was the eighth wicket to fall, having taken his season's tally to 465, his best return in a season since the 573 he accumulated in 2011.

In reply, Tarofder atoned for arriving an hour late because of trouble on the M25 by demolishing Egham's top order to 28-5 by taking 4-19 in eight overs to take his season's tally to 30 and his Merstham total to 220.

Jaffrey took his season's tally to 33 before the fireworks against the lower order took off.

After some brief resistance from the number seven, Humayoon Nasir, with 3-22 from 9.2 overs and Bobby Sharp (2-16 off four) cleaned up the tail with Egham 60 runs short.

Sharp's double included his 300th wicket for Merstham, with a long hop to force a catch to Jaffrey, whose single wicket took his own season tally to 33. Twice in recent seasons he has reached 38.

After two wins, Merstham are out of the relegation zone but only by four points, above Sinjungrammarians - whom they host at Quality Street on Saturday, before travelling to the runaway divisional leaders, Old Emanuel on the final day of the season.

While Merstham were taking a vital win at Egham, Old Emanuel lost to Horsley & Send, who therefore remain above Merstham, by just eight points.

Like England's attempts to wrestle the Ashes from Australia, Merstham's win still gives them hope - of achieving their own aims for the season.

The second team were defeated by five wickets against Purley, who came to Quality Street determined to press their outside chance of promotion.

They now sit 53 points above the seconds, but only one place separates them in the table.

The hosts decided to bat, Jack Letts notching 34 and Manish Patel 38, but the host could only manage 152 off 40.3 overs.

In reply, Harvey Jennings struck 99 before being run out by Haseeb Qureshi, and Stephen Brennan on 32 was also run out, as the visitors knocked off the target in 31.2 overs. Ameer Pasha took 2-31 and Safyan Aslam 1-38.

Afsar Khan was the star of the show as the third team kept their slim hopes of promotion alive with victory over bottom club Old Emanuel, but with two games left are looking for Dulwich to slip up significantly in order to make up the 35 point gap.

The teenager took 3-27 and scored 57 runs as the hosts first bowled out their opponents for 134 in 42.5 overs before scoring the runs in 28.1 overs for the loss of six wickets.

The game marked a return to action after a few years in retirement of Chris Lowe, former committee member and father of captain James, playing alongside another father and son, Alvin Sathya and Sathya Premakumar.

Working alongside Khan opening the bowling was Chris Clayson, who took 4-33, with Asher Syed taking too wickets near the end of the innings.

Steve Duncan put in a fantastic effort in the reply to help the scoring, notching 21.

There were several creditable performances - collectively and individually - in the fourth team's defeat against Wimbledon's fifth team.

On a good looking pitch, runs were nonetheless not easy to come by against a variable opening attack that gave away a lot of wides.

Even so, skipper Ian Lamont was looking for excuses to give others a go after 13 overs, having made a steady start with Kashif Noon who went on to top score with 27 and hold things together as others came and went.

Unfortunately, after Lamont went at 33-1 only Harrish Joseph (22) joined Noon of the top order in succeeding to score runs, with Dilhan Jayamanne unlucky to be given out caught behind off his pads.

It came down, once again, to the youngsters showing the adults how it is done, with Luca Retter (9) and debutant James Cripps (26 not out with some lovely strokes) putting on a fantastic partnership of 24 near the end before Bill Ash was unlucky to be given out, caught off a ball which looked high as Merstham committed the cardinal sin of failing to use their overs, all out for 119 after 34.2.

Nonetheless they defended that total for 28.2 overs threw some tight bowling from Asif Akhtar (0-13 off 6.2 including almost half those off the final over), Alex Reeves (0-17 off six), Cripps (0-9 off two) and Joseph's initial spell. Unfortunately they only took one wicket, however, Bill Ash eventually bowling Pervaise Khan for 27.

What was impressive was Luca Retter's performance with the gloves - he gave away just nine byes as a stand-in keeper - and Michael Pitcher's textbook barrier fielding which saved at least two dozen runs. 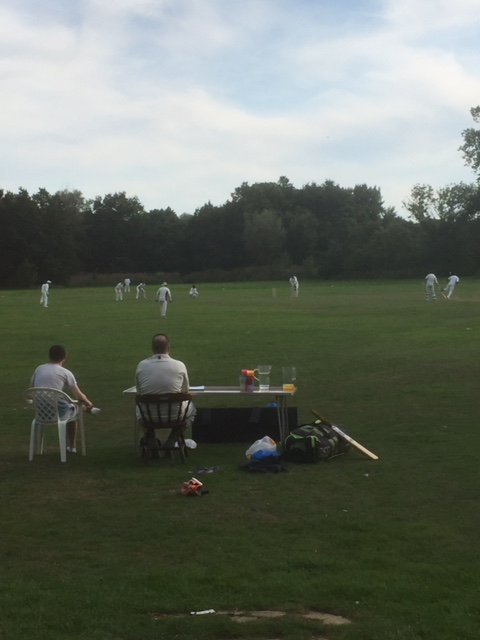