Ray Pescud's involvement with Merstham Cricket Club in the 1960s might have been short, but it was in a time of great change for the club and the area, predating the M25 and the neighbouring golf club. It was either side of the club's centenary in 1964 and coincided with the progression of two colts teams.

In 1962-63 I was in my fifth year at Reigate Grammar School - there now as a sportsman and not an academic! Peter Tharp had just left after being head boy, captain of rugby 1st XV and captain of cricket 1st XI. Merstham was basically in three areas. There was the original village on the A23, then down School Hill under the railway bridges was South Merstham based mainly on Nutfield Road, and further east was Merstham Newtown based mainly on Bletchingley Road.

I lived in South Merstham and can only assume that my RGS association got me playing for Merstham. I don't know why, because you could only reach the ground from Quality Street, and had to walk through the yard where the cows congregated above their field - often a very unpleasant experience! On one occasion, a game was stopped for a while to allow a cow to give birth to her calf. 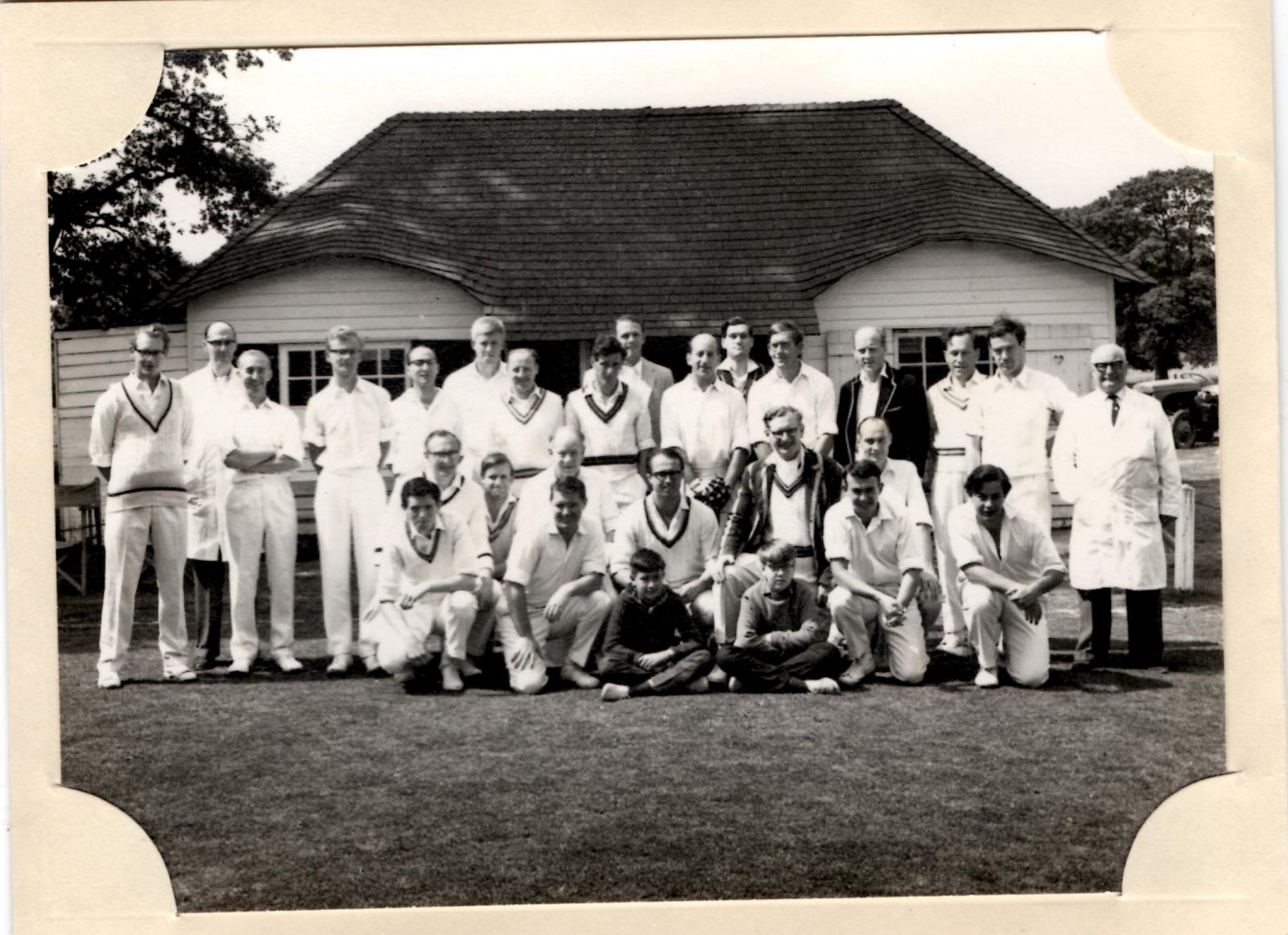 The players who took part in the Centenary match on August 1, Merstham v MCC.
From back row left, an unknown Merstham player (Nigel Pink?) plus Merstham umpire Mr Hutton, followed by Ray Jackson, James Cook, Ron Frith and Martin Hicks. The rest of the row played for MCC. Kneeling, back row from left are Ken Winchester, an MCC player, John Periam, an MCC player, Rev John Biddell (captain, in blazer) and another MCC player. Front left is Ray Pescud, then Allan Lewis, then second from right Peter Tharp and far right Clive Constant. Of the two boys in front, Pat Periam is on the right and on the left is Jeff Borer, who were scorers.

In those days, the clubhouse was at the far south east corner of the cricket field, without electricity, and there were fixed fence boundaries. When the wicket was near the edge of the square, that boundary was so short we counted sixes as fours and fours as twos. On the other side, you could sometimes run five!

I played for the only Colts XI in 1963 and was captain in 1964. In 1965 a Junior Colts XI was established, and I was one of two vice-captains of captain David Segrove's Sunday XI. In 1966 I was Sunday XI captain with Peter Tharp and David Loader as my vice-captains, and was also Hon. Team Secretary of the club. Then in 1967 & 1968 I was 1st XI vice-captain to Peter (who married Kathy on 30th March 1968), and was also responsible for management of the bar. That might seem all very straightforward, but it was far from being so.

I didn't actually play for the 1st XI in 1968. I moved to Northampton in the May after waiting for an operation on my right wrist. This was the third year in a row I had problems with that wrist - I was also told it had never healed from the first break. In 1967 I only played the second half of the season, having broken a finger in my left hand earlier in the year playing sevens rugby. I suppose also the fact that Trisha and I married on 29th May had something to do with my unavailability!

I actually captained the 1st XI five times - don't know where Peter was! - and "broke" my wrist again. It was also in 1967 that Trisha and I were the main organisers of the first dinner and dance which was held at the Lakers Hotel, Redhill. (Previously, a Spring dance and a players' dinner had taken place and continued to do so, but the ladies didn't want to be socially excluded, having supplied our teas during the season).

The chief guest was Freddie Brown and he brought along a number of Surrey's 1st XI players - some had been at the centenary dinner. I am not sure who had the original connection with Surrey (it might have been Ernest Cook - previous chairman to 1966) but in 1965 the opening fixture of Cricket Week was against Surrey Club & Ground (virtually Surrey 2nd XI arrived) and on 5th September there was a Sunday benefit match against a Micky Stewart's XI.

Unfortunately, both matches didn't get played because of rain - see also below. It looks as though I had a "more normal" 1966 as I have all the results for the 1st and Sunday XIs in my fixture card for the year. This was despite earlier in the year breaking my wrist for the first time whilst being goalkeeper for the Old Boys football 1st XI.

Although it was my 'A' level year, 1965 was probably the highlight year of my sporting life for many reasons, but I will stick to Merstham. I can use the Sunday XI to demonstrate how so many members came together and seemingly stayed for some time.

At RGS every year, three boys were promoted from sub-prefects to full prefects in their lower sixth to prepare them for their upper sixth duties. In 1964-65 Richard Williams, Nick Atkinson and myself were the three - we were also cricket, rugby and basketball 1st team captains respectively.

I persuaded Richard and Nick together with another boy, Steven Lowe, and masters Robin Bligh and Alan Sims to eventually join Merstham. The Old Boys team lost out, as had already been the case with Tharp, Segrove and Peter Wightwick. I don't think all nine of us ever played together on the same day, but at least three times seven of us did and there were many times of four, five or six. 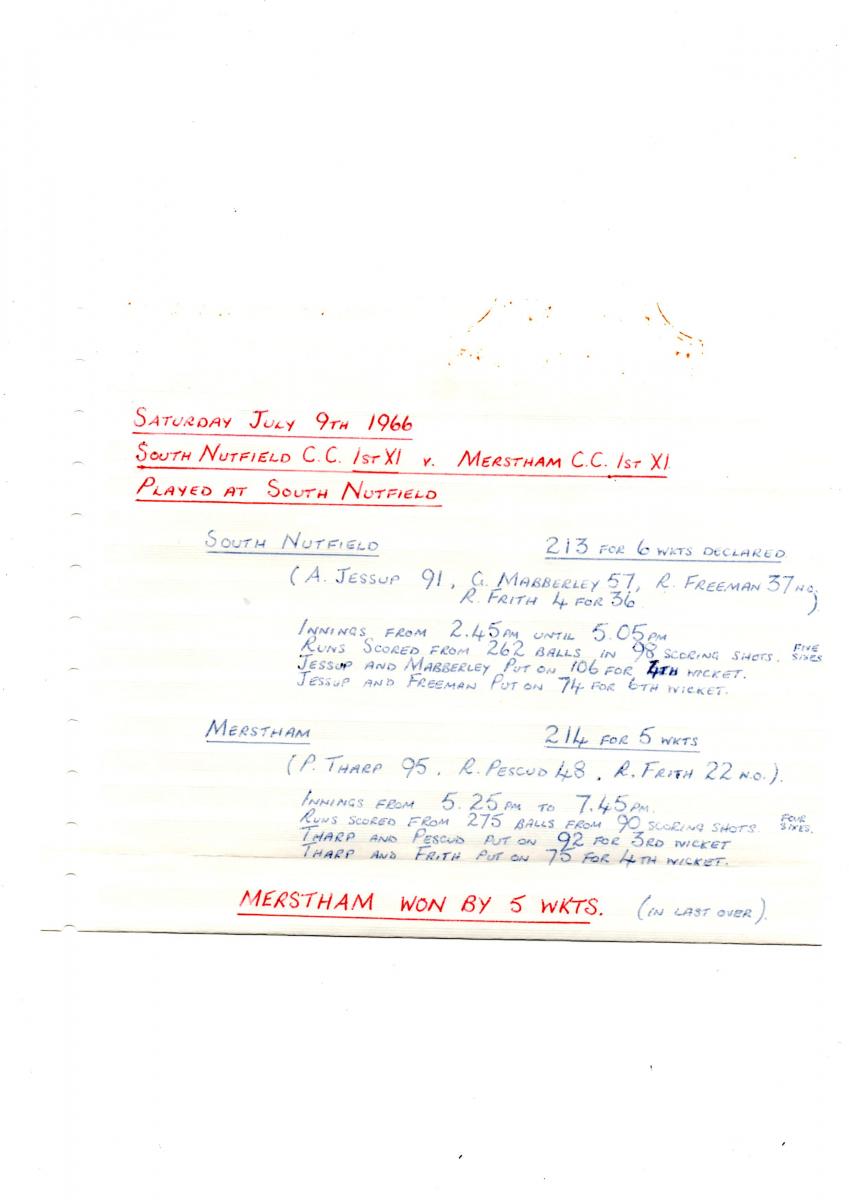 A confirmed match result written up

Three consecutive Sundays in August 1965 stand out in my memory for three very different reasons.

First it was the 15th and I was captain that day. We had already unexpectedly beaten South Merstham on their own ground, so the double was an unusual possibility. We managed an acceptable 137 with David Loader holding the second half of the innings together with 30no. I knew their number three was the danger man - a stylish cover driver. I had the usual fast, tall and gangly Martin Hicks to open the bowling. But what I then did - much to the shock of the rest of the team which included RGS 1st XI captain Richard and master in charge Robin (who was wicketkeeper) - was to give the ball to Nick who hardly ever bowled. However, knowing him from school I was confident that he and I could bowl to a seven to two off-side field and hopefully frustrate the batsmen into errors.

The plan worked. Martin, whose run-up started virtually from the boundary, roughed up the batsmen with his speed and he took three of the first five wickets. Nick and I didn't take a wicket but their number three was eventually run out after only scoring three fours, and they were 66-5. I interspersed Nick and myself with David Loader and he took 4-24 in eight overs including the last two danger men. In between, Martin bowled uninterrupted at the other end and finished with 5-39 in 22 overs. I was so over the moon with the result and the way it was achieved that I bought the team my first ever round of drinks. 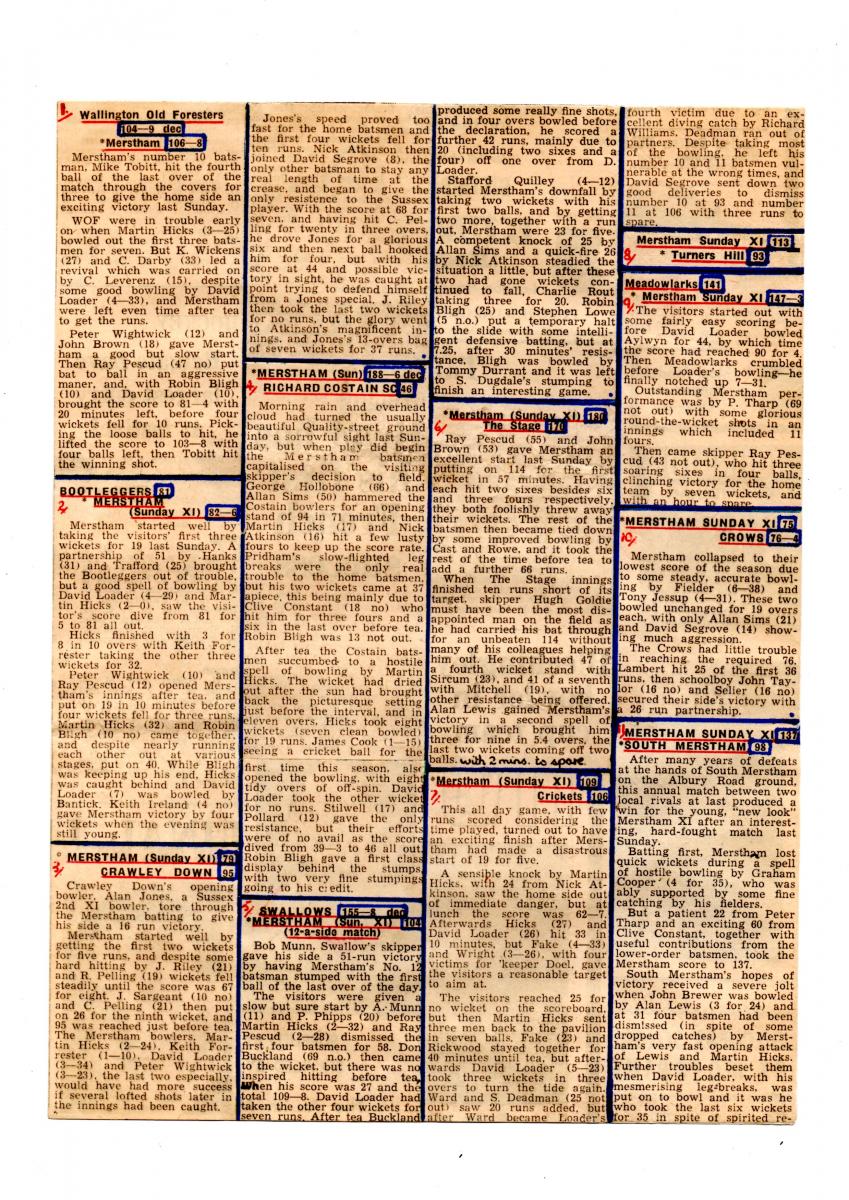 Reports from the Surrey Mirror

The next Sunday, we were away at Crawley Down with six of the RGS group in a match affected by rain. After being 51-4 they were all out for 55 with Keith Forrester finishing with 5-12 from 10 overs. Our batsmen equally struggled to get runs. Peter Tharp top scored with 17 and I then hit the winning runs just before the rain returned.

In the final match of the season, Camberley were our visitors and I captained the team to the biggest win I ever had. It was also the second highest score by a team I played in. Peter Tharp and I had a third wicket partnership of 150 in 63 minutes. He ended up with 83 and I hit 76 in our total of 242-8 dec. Then Martin Hicks took 5-28 in 12 overs in their total of 90 all out. 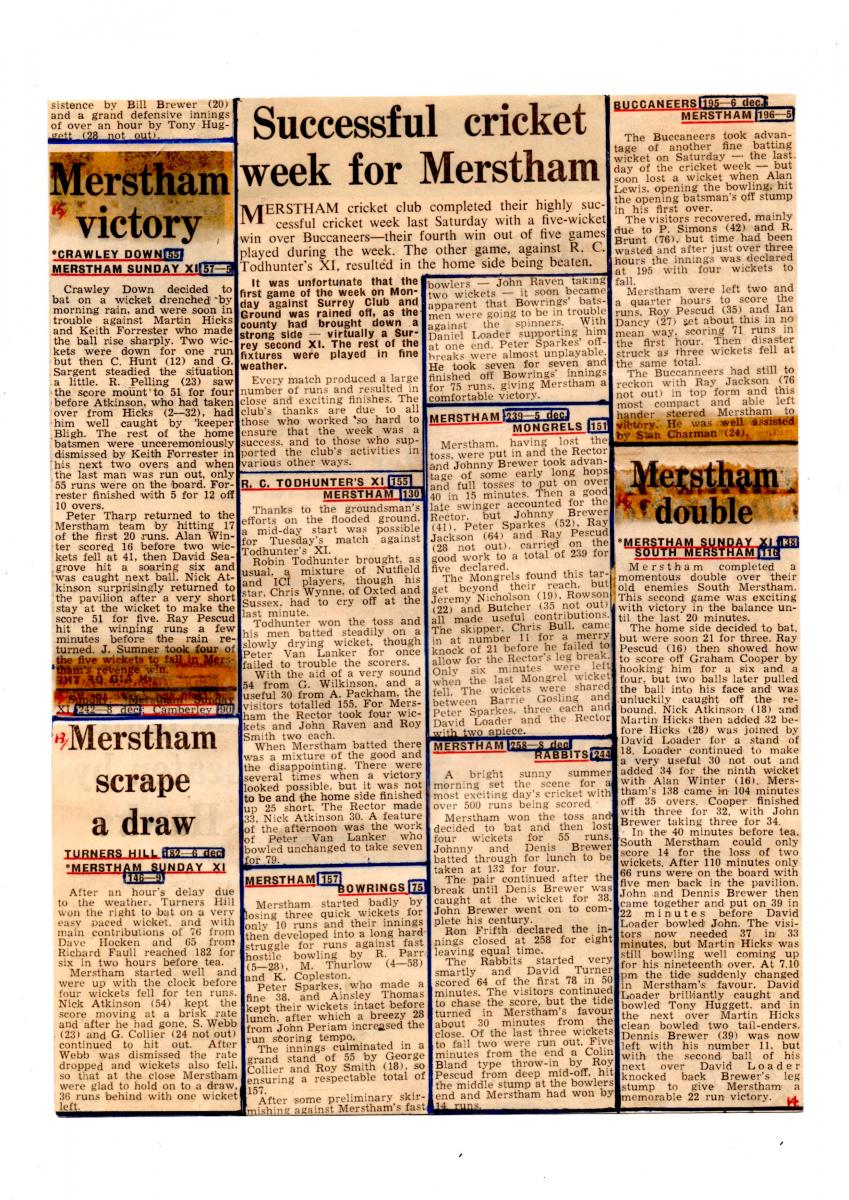 Earlier in the year Nick had hit the only century (100no) that I recall a Merstham member scoring (John Brewer scored one in Cricket Week but he was "on loan" from South Merstham). On a more personal note, I had been selected to play for Surrey Association of Cricket Clubs against a Surrey Colts XI at the Oval on 4th September. Unfortunately, it rained all day and not a ball was bowled - as above! So, my cricket in 1965 ended having played 43 matches in four months for Merstham Sunday / 1st / Club & Colts XIs and RGS 1st XI.

Also in 1964-65 I had been Linkfield house captain at RGS and Richard (Dick) Mantell was in my house and beginning to make his ability known. It was probably at this time that Merstham colts such as Gerald (Gerry) Speed and Steve Cosham started playing regularly. Keith Forrester was Senior Colts XI captain, and his father and Steve Cosham's father were involved in running the club. The influx of youngsters from RGS and around Merstham really began to change the club, at a time when many of the established members lived in "top" Merstham or the surrounding area.

In 1963 and 1964 I don't remember much else other than playing for then captaining the Colts. The obvious exception was on 1st August 1964 when I played in the special club 12-a-side match against an MCC team to celebrate our centenary. They were far too strong for us and although we hung on until late into the afternoon, we were well beaten by 164 runs (259 to 95). 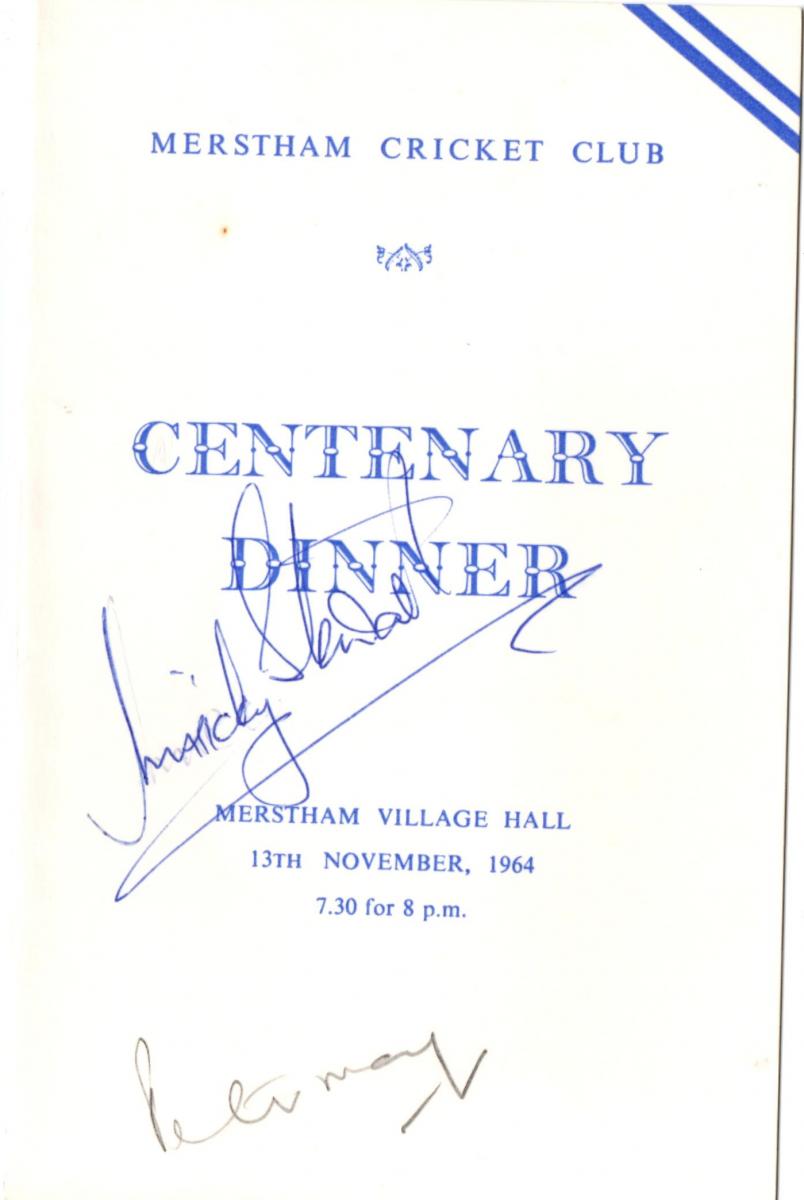 The centenary dinner card with the signatures of Micky Stewart and Peter May.