Dark clouds and a chilly day greeted the U9s at Quality Street at 8:30am last Saturday, but it was all worth it as they secured a victory over local rivals Salfords.

With memories of a victory against Salfords in a friendly game last summer, the team were eager to see if they could achieve a repeat.

Salfords arrived and their captain strolled out to the middle to meet Jack, Merstham's skipper, for the toss.

The coin spun high in the air, a cry of heads from the Salfords captain proved a good choice, giving them the win and the opportunity to field first on what looked to be a good day for bowling.

Merstham's opening pair of James Reeves and William Buckley took to the crease to face some straight and relatively quick deliveries from the opening bowler. William Buckley did a solid job to keep the bowler at bay. Tip and run seemed to be the order of the day.

After a couple of decent deliveries, the bowler struck and James turned to see his springback stumps flexing, bales flying to the wicketkeeper. Five runs down but undeterred, James took up his guard again at the beginning of the next and final over of his innings and quite comprehensively crushed a pull shot through square leg for four. Another four to the mid-wicket boundary a few balls later and by the end of their four overs, James and William had given Merstham a comfortable start.

Merstham's second pair of Matty Porter and Captain Jack saw the runs pile on thick and fast including two maximums from Porter. The remaining batting was right on point with quick singles taken wherever possible. The opposition didn't give up and were able to take a couple more wickets to give themselves a fighting chance but with the late addition of runs from Austen and Toby, including an advantageous three from some lax fielding, Merstham finished on 309-3 and he set a massive target for Salfords to chase.

With heads high and "catching hands ready" our bowlers made a good fist of the task at hand. Jaden Parerra bowling a maiden for the first of his two overs. Some top work in the field from Will Rustige saved more than a few byes and with all eyes on the scoreboard, Salfords needed 48 runs from the final four overs to snatch an unlikely victory.

Thanks to more tight bowling, a couple of wickets and some histrionics in the field (we hope your knee is okay Jack) the Magics were able to restrict Salfords to 257-5, securing a 52-run victory. 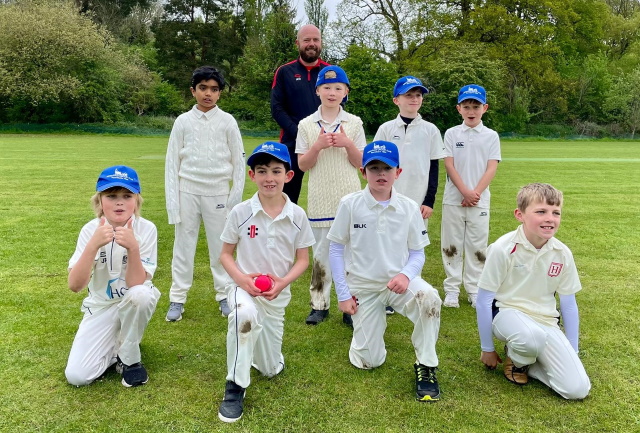